The left side of the bracket really came down to the wire, but in the end we got the semifinal matchup that most pundits have expected since the field was announced. Conversely, the committee's work in the North Korea and Airbud regions left something to be desired, as the combined seeds of those two semifinalists (18) is the highest in DTOTY history. 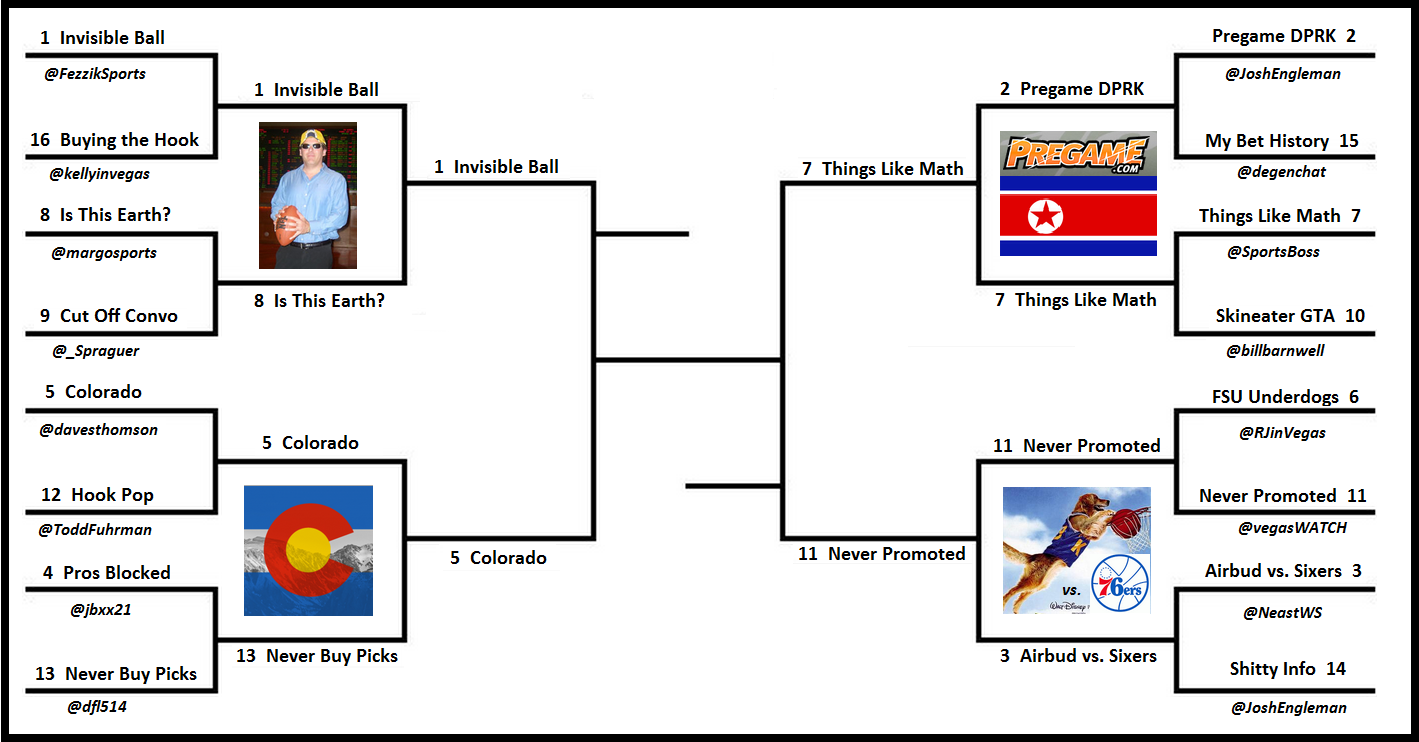 I have always felt Hockey was a faster version of Soccer played on Ice and with an invisible ball.
— Steve Fezzik (@FezzikSports) May 2, 2014


The tournament's top seed overcame a difficult draw to get here, edging past both Buy The Hook (56-44) and Is This Earth (55-45). The tweet itself certainly doesn't require any context, but here is a vaguely related tweet which is funny for several reasons.

@ToddFuhrman hmm looks like Colorado outside my house to me
— rito (@davesthomson) January 1, 2015


This late entry didn't even receive a bye past the initial round, although going up against I Know Nothing offered a comparable chance of elimination (77-23). Its last two opponents have offered significantly more resistance, with Hook Pop holding its own (58-42) and Never Buy Picks nearly continuing its Cinderella run (52-48).


But seriously tweeps its little things like that doing MATH when gambling that makes diff btwn winning & losing - so many cannot do it.
— Patrick Donovan (@SportsBoss) July 1, 2014

TLM seems to have taken some motivation out of receiving a questionably low seed, with a nice S16 performance against Skineater GTA (69-31) followed by a comfortable "wrong team favored" victory over Pregame DPRK (61-39). Given its F4 opponent, it seems only fair to provide the tweat's full context here:

I swear I will now never tweet about @sportsboss ever again. Never pay anyone money for sports picks. Thx. pic.twitter.com/oBWxV7SsKq
— Kunks Even (@Kunk7) July 1, 2014

The strongest tweat based on the first three rounds of data according in both Pomeroy and Sagarin's systems. NP crushed Zero Redeeming Qualities (77-23), obliterated FSU Underdogs (93-7), and then cruised to victory over Airbud vs. Sixers (61-39). Those first two victories could be attributed to a favorable draw, but it really silenced the critics with its E8 performance.


surveys
Posted by Vegas Watch at 9:19 AM
Labels: DTotY