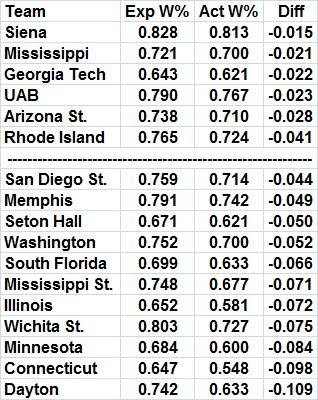 Welcome to the third annual edition of our Super Bowl proposition bet coverage. I was hoping to wait out for BetUS and SportsBetting to post some interesting props before writing this, but they are really slacking. I'll have to include those in another post if they come up with anything good in the next couple days. For now it's mostly Bodog (as usual), with appearances from Sports Interaction and Bookmaker.

How long will it take Carrie Underwood to sing the National Anthem?

Over 1m 38.5s: -125
Under 1m 38.5s: -115
It would be fun to go for the middle here, but the juice on U1:42 is just way too much. Looking at the variety of videos on YouTube of Underwood singing the Anthem, it looks like on average she comes in a bit under the Bodog total, but certainly not enough to pay the -165. Both of these lines seem about fair to me after considering the juice.

What Color will the Gatorade be that is dumped on the Head Coach of the Winning Super Bowl Team? (Bodog)
Lime Green: +600
Yellow: -125
Orange: +550
Red: +1250
Blue: +1250
Clear/Water: +160
Prior to last year, clear/water was riding a three Super Bowl winning streak, but that was snapped when the Steelers dumped yellow Gatorade on Tomlin. There may be some value in clear/water at +160, but I would hold off to see if BetUS posts anything, since last year they had that option at an absurd +700, which was a great price even though it lost.
Who will the Super Bowl MVP of the Game thank first? (Bodog)
God: -105
Family: +650
Teammates: +115
Coach: +1000
Does not thank anyone: +450

I think there's value in "doesn't thank anyone" here. Holmes didn't last year, and neither did Eli when they beat the Pats. At that point everything is just so disorganized, I think betting on chaos is the way to go. It's kind of strange that "doesn't thank anyone" is +450 given its success the last two SBs, but I get the feeling that most people don't pay a whole lot of attention to these things on a year-to-year basis.

CNBC's Darren Rovell has had good coverage of this one, which actually opened at 2.5. According to Rovell's post, that opening number was based on a similar prop for Brenda Warner last year, but Bodog failed to consider Archie's Saints ties. They took a lot of action on O2.5, and eventually moved it all the way up to the number listed above.

I don't have any further analysis, just thought that was interesting.

Undercover Boss is a new CBS reality show that will be debuting immediately after the game. It actually opened at EV, but apparently received a lot of action at that price and moved significantly since then.

And with good reason, I think; the combination of being a new show and coming on immediately after the game has to give it a huge advantage. It's not like you have to leave this up to random chance either, which is always a problem when playing a big favorite. The CBS executives are in complete control of how many times they mention each show during the game, and you'd have to think that it'll be very frequent for a new show in that time slot.

This would be a fun one to play, but there's no value here regardless of which number you pick. Here are Pinnacle's odds on his total passing yards:

I think there is tremendous value in Anheuser-Busch and Doritos at Bookmaker here, and it goes beyond just comparing their odds to Bodog's. Busch won ten years in a row before Doritos broke their impressive streak last year. Even in defeat, Busch showed very strong, with their ads placing both second and third. In 2008 Busch placed first, fifth, and sixth, with Doritos coming in fourth. And in 2007 the two companies dominated the standings, monopolizing the top seven spots. Even at +900, Busch actually has the shortest odds of any of Bookmaker's 35 options; it's like BM was aware that they should be the favorite, but had now idea just how dominant they've been.

As for this year's game, the Clydesdales won't be appearing, but Busch has purchased five minutes worth of ads, and their non-Clydesdale commercials have scored well in the past. Doritos is running a similar contest to the one that landed them the top spot last year; they'll have three commercials during the game.
Posted by Vegas Watch at 6:55 PM 16 comments:
Labels: Interesting Odds, Most Ridiculous Super Bowl Props, National Anthem, Props, Super Bowl Props, Super Bowl XLIV
Newer Posts Older Posts Home
Subscribe to: Posts (Atom)