Holy Cow That's A Bad Way Of Doing It


The new issue of ESPN The Magazine is their NFL preview, which is standard and not notable. In it, they have projected records for each team; again, nothing to see here.

The way they came up with those records, though, is absolutely hilarious. And even funnier when you consider the project was run by Accuscore, and the magazine is edited by ESPN Insider's own gambling expert(?), Chad Millman.

Here's how they explain it:

So basically Accuscore took their (super accurate, I'm sure) ratings for each team, figured out who they expected to be favored in each of the 256 NFL regular season games...and then assigned a 100% chance that the favorite would win each game. I'm not sure how exactly that is taking things "down to the last decimal point"; it seems to me that this approach is rounding the win probability for each game to exactly zero decimal points. But hey, details.

This method, as you've probably realized, does not make any sense. If there was a team that had a 55% chance of winning each individual game, any reasonable individual would expect them to go about 9-7; doing it this way would peg them at 16-0. So I'd expect this approach to come up with very extreme projections on both ends of the spectrum. Which is exactly the opposite of what you want for optimal projections, although we're so far from optimal at this point it's not even really worth discussing.

Anyway, let's check out the results! 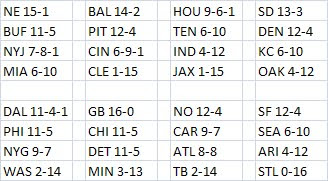 Well, that would certainly be a season for the ages.

It'd be one thing if this mess was the product of some random magazine editor who didn't know what "parlay" meant. But a combined effort between "the clear leader in sports betting systems" and a guy who writes about how to manage your bankroll for the WWL? I don't expect much, but that is remarkable.

(Title of post stolen from a tweet by @SkyKalkman on this very subject.)
Posted by Vegas Watch at 11:15 AM 3 comments:
Labels: Dumb People, NFL, Projections

This Is Also Completely Wrong

These two bets, taken together, are a very weird mix. The given likelihood of Gronkowski scoring a touchdown in the first half is just 35.3 percent, but his odds of scoring a touchdown in the game are at 59.6 percent. Those two numbers imply that Gronkowski will score in the second half about 92.1 percent of the time, and that a bet on Gronkowski not scoring in the second half would have true odds of about +1166 or so. I hope somebody offers that.

Doing the math wrong...whatever. But doing the math wrong, getting an answer that MAKES NO SENSE, assuming you are correct, and just going with it? And if those two lines were truly implying something insane for the 2H, wouldn't one side of the 1H or FG line have to be way off, too? So...maybe look into that? 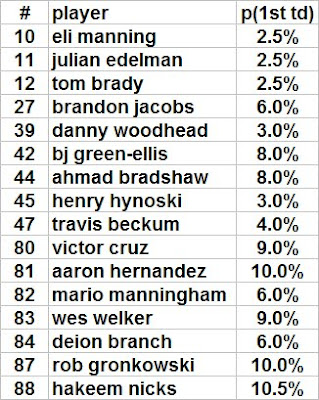 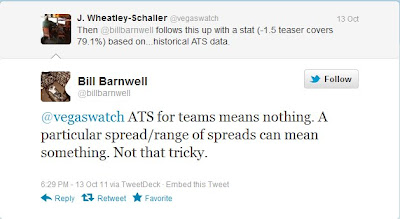 Who will win the Super Bowl XLVI Coin Toss?

What will be the result of Super Bowl XLVI Coin Toss?

Not quite as good as last year, but this is still one of my favorites.

Will Gisele Bundchen be shown on TB during the game?
From kickoff to final whistle, live pictures only, halftime does not count.

Arb! I tried to research this one but gave up after finding a fake Gisele Super Bowl blog and discovering that she is supposedly on her way to becoming very, very wealthy.

Who will be shown first?

I don't get why Giselle isn't favored by more; isn't she a LOT more famous than Eli's wife?

Who will the MVP thank first?

This one is the best. Sportsbook also has the same prop for winning coach rather than MVP, and is offering "Does Not Thank Anyone" at +800. My unofficial summary from the last four years:

Last year some books graded it as Rodgers thanking the defense (teammates), and some graded "Does Not Thank Anyone" as a winner since he didn't say the word "thank". Either way, +250 continues to be a great price, available across the board.

Not sure about this one. It's been orange the last two years, but yellow and clear the two before that; Stockle Mon has a more extensive summary. Since it was clear/water the last time each of these teams won and four of the last nine dumps, that seems like the best pick here if you can get the +215.

Will Kelly Clarkson omit/forget a word of the National Anthem?

Inspired by last year's mishap. No real opinion here; if anything I'd take the +700 at 5D, but probably just stay away.

How long will it take Kelly Clarkson to sing the National Anthem?

Stockle Mon has also researched this one quite a bit (good work!), and it doesn't seem like there's much of an edge. So, when in doubt, line shop. Here is my completely-made-up estimate of the probability of the total time being within each second:

The thought behind the skew was that 1:34 is a pretty low time, so there's more room to go way higher than way lower.

That was an unbelievable waste of time, but it does allow me to see if a middle might be worthwhile:

That's assuming the 5Dimes line is efficient (which is not true at all), but you can shift the graph around a bit and you still come out ahead, so I went for the O1:34/U1:35 middle.

Reader Will W. recommended this one, noting that he laid the chalk. Wikipedia tells us that Boston won by 14 four years ago (81-67), although it seems possible that was a bit inflated since the Pats were 18-0.