An American success story if there every was one. That's only one side of it, though. In some corners of the internet (including this blog), there is a feeling that Bell has not found his success in a legitimate way. This is the 12th post in a series detailing the reasoning behind that particular feeling. If you'd like to start at the beginning, it's here.

As noted, Bell tweets out a lot of annoying/worthless/false nonsense. But nothing is more frustrating than when he takes other people's (actually interesting!) info and makes it his own. One recent example: 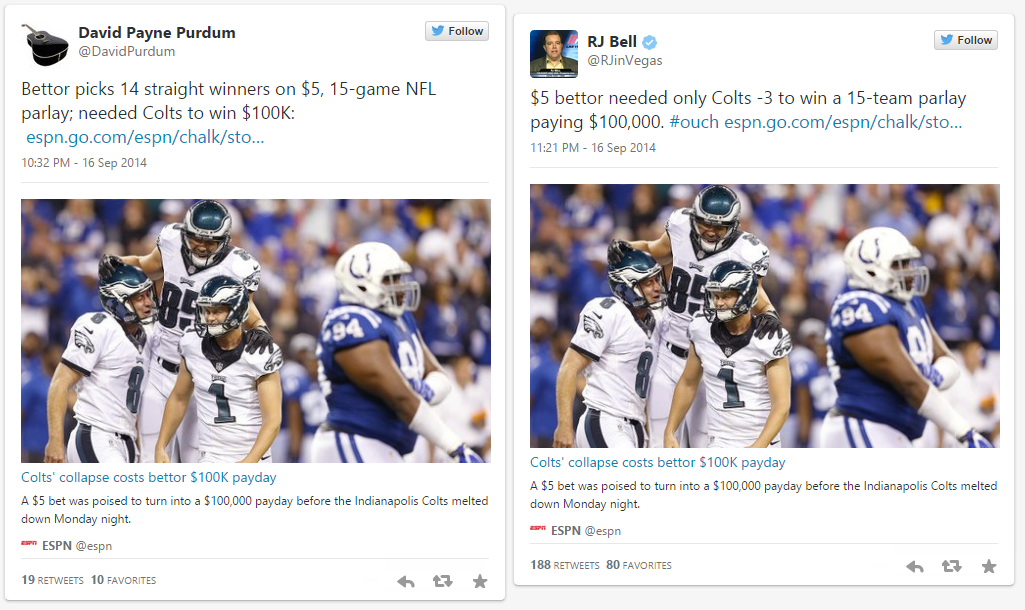 Purdum did the reporting. Purdum wrote the article. Purdum highlighted the interesting anecdote in his tweet. There is absolutely no reason for Bell to do anything but just RT Purdum, except for the fact that Bell wants the RTs and attention for himself and his #brand.

So he makes his own tweet out of it, even adding that the line was -3, which wasn't mentioned in either Purdum's tweet or his article. Never mind that Bell was almost definitely just guessing on this, and those $100K cards are "ties lose", so the bettor essentially had -3.5, but it's not like that's a key number anyway, right?

This may be a petty thing to complain about, but I find it to be absolutely enraging, and it keeps coming up: 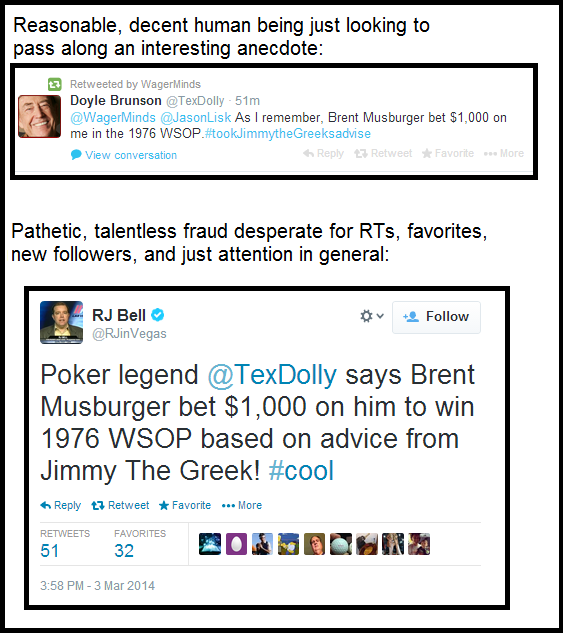 I guess he is adding all sorts of value with the #ouch and #cool hashtags?

Unsatisfied with his standard nonsense, Bell really took things to another level over the summer:


Rovell took the standard repackaging angle, so RJ felt like he had to switch things up. What a crew.

Bell's tweet above is just straight up theft. And in case you thought there was any chance that he'd gotten this info independently (lol):

Some media ambiguity whether this year's British Open counts for McIlroy's bet (since Rory is now 25). It does. https://t.co/xz1PQIDSTQ
— RJ Bell (@RJinVegas) July 19, 2014

To summarize: In the tweet that ended up getting 1,769 RTs, Bell didn't deem it necessary to source the info he blatantly stole. In his next tweet, which got 11 RTs, he linked to Cotter's timeline, in an effort to clear up the "ambiguity" he had created by re-wording the tweet that he stole.

Solid. Bell was so impressed by the response to his stolen tweet that he just kept doing it:

This has nothing to do with being completely ignorant about how betting markets actually work, or having no clue how much HFA is worth, or using data mined trends that sound impressive. This is just a con artist promoting his scam by stealing others' work. Which is fine, I guess, except...stop playing into it!