An American success story if there every was one. That's only one side of it, though. In some corners of the internet (including this blog), there is a feeling that Bell has not found his success in a legitimate way. This is the sixth post in a series detailing the reasoning behind that particular feeling. If you'd like to start at the beginning, it's here.

RJ Bell has turned himself into much more than the founder and CEO of a tout site that sells shitty picks; there's a reason this series isn't called "The Long Con of @PregameNow". He's a Grantland columnist, an ESPN radio host, an occasional SportsCenter guest, and a very popular tweeter.

Which would be fine, I'm all for more coverage of sports betting markets in the mainstream media. Except Bell either doesn't know, or simply doesn't care about, what actually goes on in these markets. All of these media appearances have nothing to do with sharing accurate or interesting information. Rather, their only purpose is to build Bell's brand so he can eventually get you to his tout site and sell you some shitty picks.

There are numerous examples of this; we'll start with the opening lines that Bell is fond of tweeting about. He'll often do this soon after a big matchup has been set:

For once, Bell is being truthful; BetOnline (BOL) posted a line shortly after the Spurs defeated the Thunder in Game 6, before anyone else. The problem is that the lines BOL posts before anyone else are essentially meaningless, and divorced from the actual market.

Here's what happens. BOL posts a line as soon as possible, in no small part because they know they'll get some free PR when people who are desperate for attention tweet about it. This initial market will have a low limit (often $250), such that if a serious bettor had an opinion on the line, he would wait for other shops with higher limits to post their lines so he could get more than $250 down.

You still get some people betting into this line, which Bell will of course happily report on as well:

It's difficult to put into words just how non-noteworthy that move is.

Wow! Tons of sharp money must have come in on Miami!

But as soon as a more serious book (usually CRIS or Pinnacle) posts their line, BOL itself no longer cares about anything that happened in their "World Opener" market: 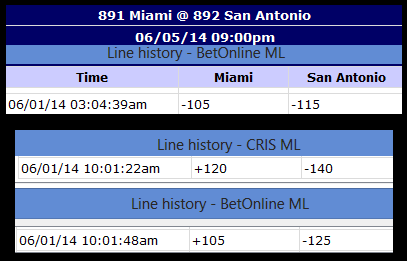 Earlier, Bell was tweeting about the BOL line moving five cents like it was breaking news. Now they're moving 10 cents on air just to get their line somewhere near CRIS' opener. Maybe those bets driving the Heat up to -125 weren't so sharp after all?

While Bell's late night tweets about the Finals market were particularly amusing, this isn't even an extreme example; it happens all the time. Here's Game 1 of the Stanley Cup Finals: 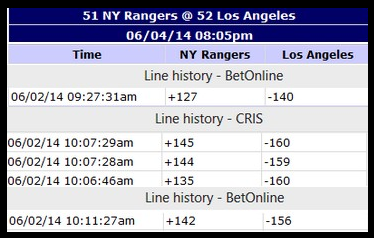 Moving 16 cents on air to get in line with the real market. Standard.

It also doesn't have to be a respected offshore book for BOL to suddenly not care about their BS market. This was very clear after the NCAA tournament field was released this year: 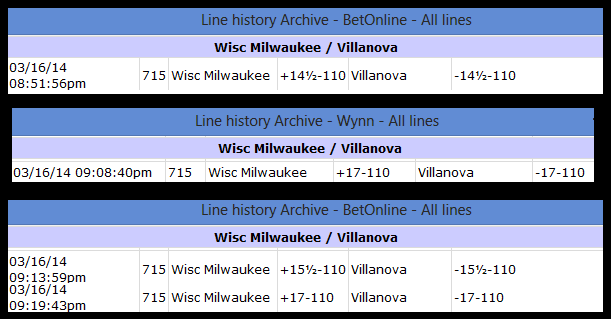 That sure escalated quickly.

The BOL "World Openers" market is nonsense. The line is initially posted by some BOL employee who has an established track record of not being very good at this. It's bet into by people who are content betting $250 at a time. And then other books post lines, completely ignoring BOL, and BOL moves their line toward the sharper shops' price, because that is the actual market.

But in Bell's world, none of that matters. He often makes it very clear that maximizing his exposure is the only thing he has any interest in. Why else would you possibly dedicate eight separate tweets to BCS lines over a three hour period? 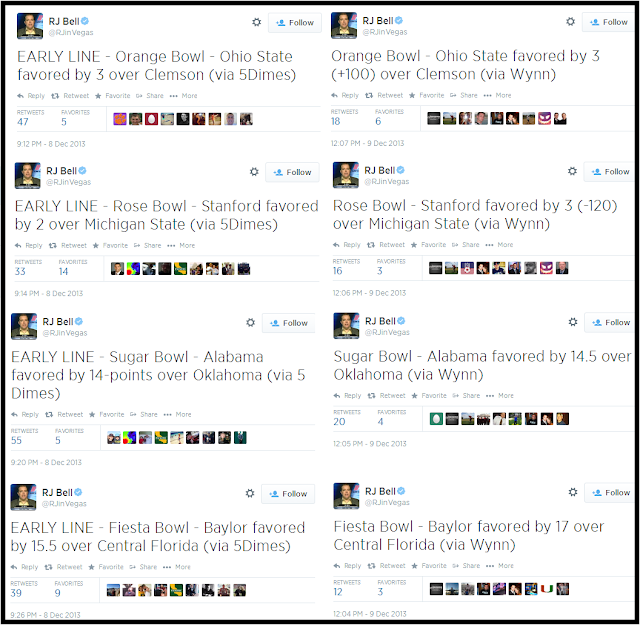 He conveniently doesn't mention the juice or the max for the 5Dimes lines, possibly because they were dealing 40 cent lines with a $500 limit. But more importantly, that sequence of tweets combined for 240 RTs. Success!

At least what he's trying to accomplish in that situation is obvious. I still don't understand what happened here:

A sampling of lines from when Bell sent this confounding tweet out: 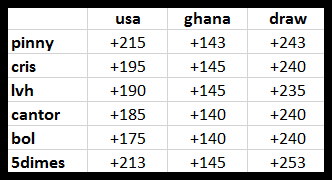 This isn't a matter of a small discrepancy from one book to another. The market was very clearly implying one thing, and Bell reported something not even close to that.

Apparently Bovada -- a fantastically square US-facing book which would clearly shade their line to give homer USMNT bettors an inferior price -- was dealing +160/+160/+250 around this time. It'd be bad enough if Bell referenced Bovada in his tweet, but he doesn't even do that, instead acting as though the odds he reports are somehow an accurate representation of the overall market.

This gets back to the same issue I've written about before:


Simply reporting facts just shouldn't be that hard. If you were making a legitimate effort, that is. But R.J. is such a fraud that he can't even reach that relatively low bar. When you're so eager to please and so obsessed with people retweeting you (as often as possible), when you have no clue how these markets actually work, and then on top of that you're so loose with the facts themselves...even if you WERE reporting something which was pertinent and interesting, why would anyone believe you?

The man simply cannot be trusted. With anything. I'm not sure how may times this is going to have to be demonstrated for people to stop acting like he's a legitimate source of information or "analysis", but I'm willing to find out.