An American success story if there every was one. That's only one side of it, though. In some corners of the internet (including this blog), there is a feeling that Bell has not found his success in a legitimate way. This is the eighth (!) post in a series detailing the reasoning behind that particular feeling. If you'd like to start at the beginning, it's here.

One of RJ Bell's favorite things to do during the NFL season is to tweet out "noteworthy" trends relating to upcoming games. As per usual, he does this to get retweets and promote his #brand, while displaying absolutely no interest in providing helpful information.

Bell wants you to believe that his selfless goal is to provide the best and most relevant trends possible:


At the risk of startling anyone, this is an easily disproven lie:


Bell would like you to believe that he went back 18 games because he feels that's the most relevant sample. Because you are a sentient being, you do not believe this. You are completely justified in your skepticism: 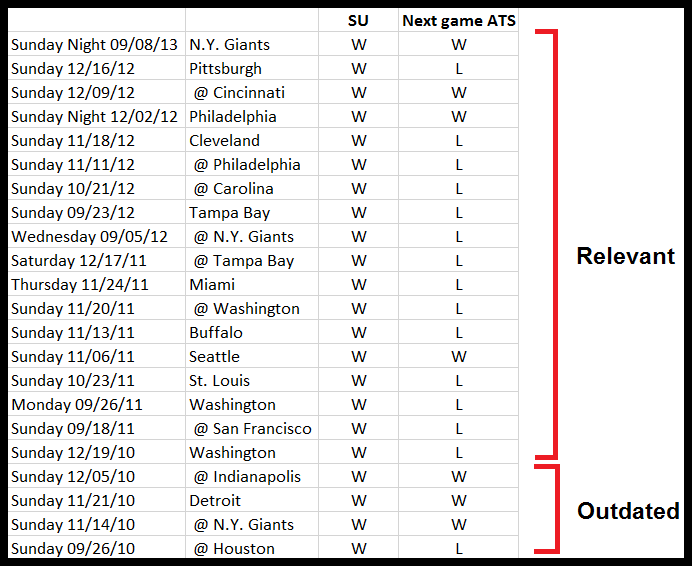 You could spend days picking apart the ridiculously arbitrary endpoints used for these trends, but I'll just do one more: 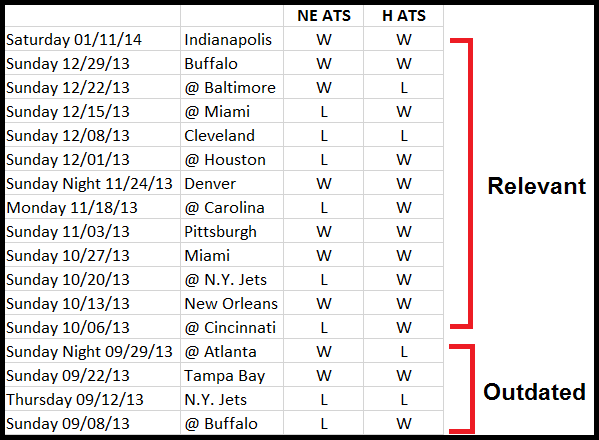 Although the "outdated" sample isn't as extreme, this one may be even funnier. Bell could easily use the full season of data and the trend would still be an "impressive" 13-4 ATS, which he could argue was the "most applicable" sample. But he just doesn't care, and the last 13 games make up the most eye-popping record, so the last 13 games are what he uses.

Bell is also a big fan of taking advantage of everybody's confirmation bias; he often posts trends that kind of, sort of make sense. While still data-mined garbage, these are great from his perspective because the sample doesn't have to be as large or extreme:


And then, when the ATS % is way less impressive three games later (because the initial sample size was 15 games), he can just switch up his story:

Similar to the long-term success of his touts, Bell doesn't actually seem to believe what he's saying. As usual, the information provide is only useful if parsed in just the right way:


Sharing a noteworthy game trend does NOT mean I'm betting that team. In fact, there will often be noteworthy trends on both teams in a game.
— RJ Bell (@RJinVegas) October 13, 2013


@locher27 Every game has noteworthy trends on both sides - their NET effect, plus many other factors dictate which side the sharps are on.
— RJ Bell (@RJinVegas) October 27, 2013


If you're questioning whether every game has a "noteworthy" trend on either side, it's probably because Bell's definition of "noteworthy" differs from yours (and the rest of the world's):

#Patriots in December under Belichick, all spreads EXCEPT when favored by more than a touchdown: 24-7 ATS
— RJ Bell (@RJinVegas) December 17, 2012

This information isn't useful in any way, no matter how well you parse it. Bell only tweets out trends because it's the National Football League™, and he knows people will eat up any NFL information relating to gambling. Which would be annoying enough if he didn't act like he was performing a public service by sharing this info (at no cost to you!), rather than just, as always, serving himself.