An American success story if there every was one. That's only one side of it, though. In some corners of the internet (including this blog), there is a feeling that Bell has not found his success in a legitimate way. This is the 14th post in a series detailing the reasoning behind that particular feeling. If you'd like to start at the beginning, it's here.

This man is out of control. From Monday afternoon:


Entering this week, #Colts only team with 6 covers against the Vegas number.
— RJ Bell (@RJinVegas) November 3, 2014


Great info as always. A slight disagreement, though:


Hmm. For some clarity, let's check Covers (excluding Week 9, because "entering this week"): 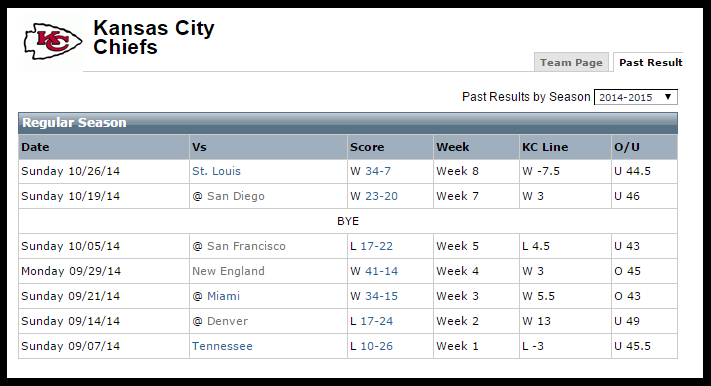 Okay, fair enough. If you count the 49ers game as a loss (or even a push), the Chiefs only had five ATS covers coming into the week. Makes sense, as long as you don't...

Don't see any getting around this one. RJ is using KC +4.5/5 to make the Colts stat work, and KC +5.5 to claim they've covered seven straight. He was corrected twice along the way, and obviously ignored the haters both times.

@keithlaw @WillBrinson You may or may not agree. My goal is to provide accurate facts for people to consider and be entertained by.
— RJ Bell (@RJinVegas) October 17, 2014