RJ Bell is the founder and CEO of Pregame.com, a sports betting website that includes forums, odds, contests, and picks (both of the free and for purchase varieties). It is one of the most successful sites of its kind, in no small part due to the popularity of Bell, who has accumulated over 90K Twitter followers and established himself as the mainstream media's go-to "expert" for stories involving gambling on sports.

An American success story if there every was one. That's only one side of it, though. In some corners of the internet (including this blog), there is a feeling that Bell has not found his success in a legitimate way. This is the 15th post in a series detailing the reasoning behind that particular feeling. If you'd like to start at the beginning, it's here.

We've previously looked at how, beyond everything else, Bell cannot be entrusted with simple reporting. Which shouldn't come as a surprise, since he has little reason to "provide accurate facts" and every incentive to draw attention to his #brand by stretching the truth.

Last week's Florida St.-Miami line gave us another excellent example of his untrustworthiness:


Unlike RJ, Ed Salmons (@llased) actually is an oddsmaker, at the LVH. Now, how much he is involved with actually originating college football lines is an entirely different question. But let's walk before we can run here; if Salmons actually said that, of course Bell is going to tweet about, as that's about as juicy a CFB #nugget as you'll find. 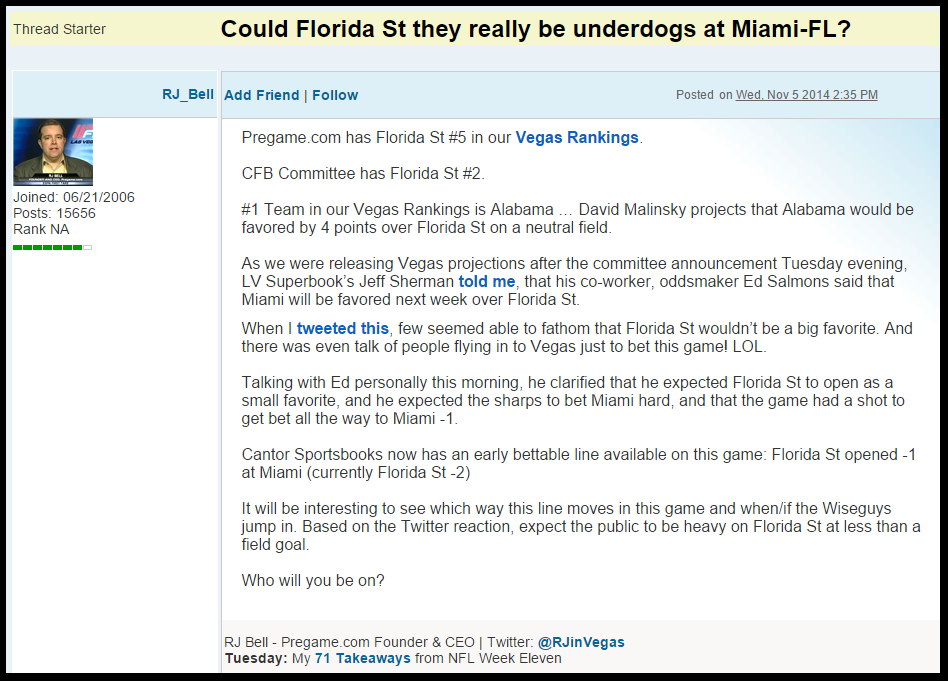 Salmons never said he expected the Canes to be favored; Bell never even fucking talked to Salmons before the initial tweet. Bell talked to Sherman, who had been chatting with Salmons. Through that grapevine, Bell caught wind of the fact that Salmons had (maybe!) casually mentioned something about Miami (maybe!) being favored.

Any respectable journalist (lol) would follow up with Salmons himself prior to moving forward, especially since there was no rush; the standard market for this game wouldn't even be open for another five days. But Bell saw no upside for his #brand in that approach; he already had the nugget that would get him the maximum number of retweets, so he just went ahead and tweeted it, turning a tenuous rumor into a definitive statement.

It seems the reaction was even stronger than Bell could have imagined, prompting him to actually follow up with Salmons, now that he'd already banked his 400+ RTs. Predictably, it turned out that he had wildly misquoted "@llased" who (at best) said he thought it was possible that the Canes would be favored by 1 at some point during the week.

In Bell's mind, this wasn't a failure on his part, but a success, as it provided more content (although this take wasn't nearly as hot):


How good does Vegas think Florida St is? Could they really be underdogs at Miami-FL? http://t.co/Mct3KcuoIN
— RJ Bell (@RJinVegas) November 5, 2014


Then, when the spread was FSU -2.5 on Sunday night (right in line with the early Cantor market that Bell conveniently ignored), the temperature of RJ's take continued to drop, as he turns from trusted expert into interested observer:


Florida St currently -2.5 at Miami-Fl. Will be interesting to see if the predicated sharp Mia action comes in this wk http://t.co/sBXQWr3Y2t
— RJ Bell (@RJinVegas) November 10, 2014


In the end, the line fluctuated between FSU -2.5 and FSU -1 at the LVH throughout the week, eventually closing at -2.5. So Salmons wasn't far off at all, if you go by what he actually said. Bell was though, pretty much every step of the way.

Sounds about right. No harm done, however; RJ will probably surpass 100K followers by Christmas.